Although Bowie had existed for some time without a bank, in 1890 it suddenly occurred almost simultaneously to at least two groups that a financial institution should be organized. Although the first couple of attempts to form a bank by these two groups were unsuccessful, the Comptroller of Currency issued National Bank Charter no. 4265 to the First National Bank on March 10, 1890.

You can easily learn more about Legend Bank's history during specific timeframes by clicking the timeframes below or scroll through and learn all about us since 1890. Thank you for your interest in Legend Bank. We are proud of our history and look forward to serving you with your needs today.

In January, 2020, we opened our full-service location in Sherman to serve the Grayson county area.

On March 10, 2020, we celebrated our 130th anniversary of serving customers and businesses in our communities. Celebrating our 130th anniversary in 2020 was different than we all imagined it would be. However, it provided us with an opportunity to continue our history and tradition of remaining steadfast during historical, economic, and technological changes. Our bankers worked together to overcome the challenges, limitations and new requirements of the COVID-19 pandemic, to find ways to serve you, as shareholders, and all of our customers in the safest ways we deemed possible. We helped business customers continue to pay their employees and keep their businesses open. Legend Bank has made the following impact in supporting local
small businesses through the PPP:

In January 2021, we opened our remodeled Whitewright branch with an ATM . The exterior of our branch was redesigned with a new brushed aluminum finish tower featuring new Legend Bank signage. The front entrance was expanded to make coming to the bank even easier. Our teller area and lobby were refreshed with an expansive new look to improve our service to customers. Our lobby and offices now feature beautiful new flooring, paint, lighting and so much more!

In 2017, Legend Bank was selected as the 4th Best Bank to Work for in the Nation and the 22nd Best Company to
Work for in Texas. In September 2017, Legend Bank opened the Bowie Operations Center, next to the Bowie Banking Center and Headquarters.As we face a new era of providing our communities' with another 130 years of sound banking and financial services, we can say with complete confidence that at Legend Bank, the legend continues . . .

We opened full service locations in Wichita Falls and North Richland Hills in 2018. On April 15, 2019, Legend
Bank announced the acquisition of the Independent Bank Whitewright location. On June 3, 2019, Legend Bank acquired Enloe State Bank in Cooper. This was a unique opportunity for Legend Bank and we quickly worked
together with the Enloe State bankers to welcome them to Legend Bank.

Facing increased competition from other banks and with the presence of over 300 banks in Texas at that time named First National Bank, the Board of Directors realized it needed a more distinctive name in order to capitalize on future growth in different markets. Staying true to the bank's original commitment of remaining an independent and locally owned bank in each of the communities it serves, the name "Legend Bank" was chosen in 2001.

Expansion continued with new locations in Whitesboro, Bonham, Ft. Worth, Wichita Falls and Sherman. In 2015, we celebrated a monumental anniversary, 125 years of service to our customers and the communities we serve. It’s  quite remarkable how we strengthened our roots through the years, since our founding as First National Bank of Bowie in 1890.

During the 1940s and 1950s, the bank thrived. It wasn't long before the bank had a need for additional space and a number of additions were made to the original bank building at this time. In the late 1940s and early 1950s the bank continued to prosper with deposits exceeding the $1 million mark in 1940. The individual who coined the phrase, "The First Million is the hardest," must have been thinking of First National Bank. It took 50 years to get to the first million; less than three years later the $2 million milepost was passed.

Pictures inside the Bank illustrate the darker days of banking during the 1920s. In 1932, at a time when all the other banks in Bowie were closing their doors, First National Bank did not even spend the money to have its statements printed. On December 14, 1932, statements were typed and copies were prepared with carbon paper to save the cost of printing. Less than three months after this date, a nationwide bank holiday was declared. On March 15, 1933, the first day that any national bank outside of reserve cities and cities with clearing houses was permitted to open, First National Bank reopened for Business.

It's our privilege to serve.

Our mission is to be a profitable, sound, responsive, locally-owned community bank that provides ultimate protection for depositors funds. Our goals are to grow and create shareholder value.

We recognize for us to achieve our mission we must commit to:

The foundation of our personal and business practice includes: 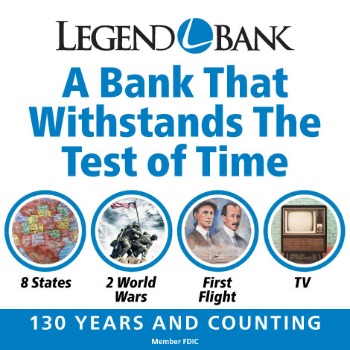 Serving customers for over 130 years is a legacy in which we are really proud. Remaining steadfast through historical, economic and technological changes has built a tradition of service that withstands the test of time.

Step back in time and explore the history of Legend Bank.